Most common baby health problems and how to overcome them? 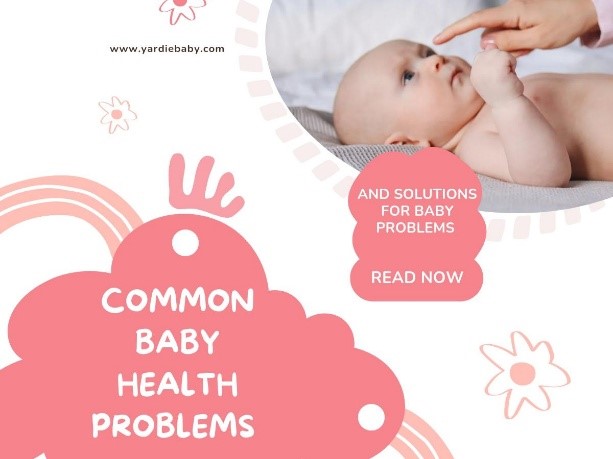 Various baby health problems, such as fever and constipation, can make children cranky and parents panic. However, try not to worry excessively because there are early treatments that can be done to overcome various health problems in babies.

As a parent, the mother certainly feels worried when the little one seems fussy or cries non-stop. The reason is that this can be a sign that the Little One is sick, especially if it is accompanied by various other symptoms of illness, such as pale skin, fever, oreven vomiting.

The immune system of babies, especially those under the age of 1, is not fully formed. This is what causes babies to be more susceptible to getting sick.

There are several health problems that occur quite often in babies and mothers need to be aware of, among them:

ARTI is an infection in the respiratory tract that is usually accompanied by symptoms such as cough, runny nose, stuffy nose, and fever. This disease is very contagious, especially in babies and children. Some examples of ISPA are influenza, sinusitis, bronchiolitis, and COVID-19.

ISPA caused by a viral infection can usually heal on its own without specific treatment. However, this condition still needs to be watched out for, because in certain cases, such as COVID-19, ISPA can cause other complications that are dangerous for babies.

Fever is not a disease, but one of the signs that the baby’s immune system is active against bacterial or viral infections that cause disease. Fever can also be one of the reactions that arise after the baby receives immunization.

Even though it is not always dangerous, a fever in your little one still needs to be watched out for, yes, especially if it is accompanied by several other symptoms, such as difficulty in breathing, vomiting, or even convulsions.

Another health problem that often occurs in babies is diarrhea. Digestive disorders can be caused by several things, ranging from viral infections, food allergies, to food poisoning contaminated with germs.

Diarrhea can also cause the baby to experience dehydration.

Constipation in babies can be characterized by a bloated stomach and frequency of defecation less than 2 times a week.

In general, constipation in babies is caused by excessive consumption of formula milk, lack of body fluid intake, and the habit of consuming solid foods low in fiber.

Colic is a condition where the baby cries for hours and is difficult to stop. Although the cause is not yet known for certain, colic in babies is thought to occur when the baby feels uncomfortable, for example when hungry, has difficulty digesting food, or is in an environment that is too hot or cold.

Not only does it cause red bumps on the skin, mosquito and insect bites also cause itching. Although the Little One has not been able to say it directly to the Mother, this itching can certainly make him feel uncomfortable.

Diaper rash is also one of the health problems that many babies experience, especially if the diapers are changed rarely or for too long. When experiencing diaper rash, the baby will appear fussier because the skin around the thighs can become irritated, itchy, and bumpy.

HOW TO OVERCOME HEALTH PROBLEMS IN BABIES

Various health problems in babies mentioned above can be overcome with simple care at home. One of them is to give the little one more milk in order to strengthen his body’s resistance to fighting disease.

When your little one is able to consume solid food (MPASI), give him healthy food that contains a variety of nutrients, such as vegetables and fruits, eggs, fish, and meat so that he recovers faster.

Mothers can also apply some of the steps below to overcome the baby’s health problems that often occur:

Give a warm shower to baby

Mothers are advised to bathe the Little One with warm water when he has a cough, cold, and fever, to lower his body temperature and relieve his breathing.

A warm bath can also make your little one more relaxed, so that it is easier for him to defecate when experiencing constipation.

Mothers can also try steam therapy to relieve breathing when the Little One has a cough and cold.

Steam therapy can be done by placing a bucket of warm water mixed with a few drops of telon oil in a closed space. After that, accompany the little one in the room for about 15 minutes. Let him inhale the warm steam until he can breathe freely.

When your little one is sick with a cough or cold, keep him away from dust or cigarette smoke as much as possible, yes. This is important so that the little one can recover faster.

Choose an anti-mosquito product that has the right content and is safe for babies. Mothers can use anti-mosquito telon oil that contains Natural Rhodinol (citrus plant extract) that can protect the little one from mosquito and insect bites.

The mother can also gently massage the baby’s body after bathing, especially on the abdomen, back, palms, and feet, using telon oil that contains eucalyptus oil, coconut oil, and olive oil.

The content of eucalyptus oil can warm the baby’s body and reduce some of the complaints he experiences. Meanwhile, the soft content of coconut oil and olive oil in telon oil is suitable for use and can moisturize the baby’s skin.

Although it is useful as an early treatment for health problems in babies, you need to be careful when using telon oil. Avoid applying telon oil on the baby’s face and don’t let the telon oil be swallowed by him.

However, if Little One’s condition does not improve despite having done the various methods above or if the condition worsens, Mother needs to immediately take her to the doctor to get proper examination and treatment.